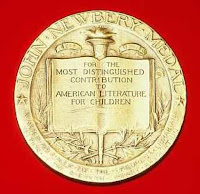 My mom used to have all the Newbery books up until the 90s. Now I am trying to find all the Newbery books or at least up until 2022 that way it will be an even hundred years of children's literature.
During my searching I realizes that the older Newbery books are hard to find. The oldest book I have is a three book bind-up of Doctor Dolittle series. The first book is the one with the Newbery but I not going to complain. Given the fact that I found the book at Target and not at a used book sale tell you I was getting *gulp*...desperate.
Titles with a book (📚) at the end are books I have a copy of but haven't read.
Titles with a check mark (✔) at the end are books I have read. Some of them I read a long time ago.
Titles with a star (🌟) at the end are books I have review on this blog. Clicking on the title will take you to the review.
2020- When You Trap a Tiger by Tae Keller 📚
2019- Merci Suárez Changes Gears by Meg Medina 📚

2015- The Crossover by Kwame Alexander📚

2013- The One and Only Ivan by Katherine Applegate ✔

2011- Moon over Manifest by Clare Vanderpool

2010- When You Reach Me by Rebecca Stead

2007- The Higher Power of Lucky by Susan Patron

2004- The Tale of Despereaux by Kate DiCamillo ✔

1996- The Midwife's Apprentice by Karen Cushman 📚

1988- Lincoln: A Photobiography by Russell Freedman

1982- A Visit to William Blake's Inn by Nancy Willard

1981- Jacob Have I Loved by Katherine Paterson 📚

1978- Bridge to Terabithia by Katherine Paterson ✔

1973- Julie of the Wolves by Jean Craighead George ✔

1965- Shadow of a Bull by Maia Wojciechowska

1959- The Witch of Blackbird Pond by Elizabeth George Speare 📚

1958- Rifles for Watie by Harold Keith

1955- The Wheel on the School by Meindert DeJong

1950- The Door in the Wall by Marguerite de Angeli

1943- Adam of the Road by Elizabeth Janet Gray

1942- The Matchlock Gun by Walter Edmonds

1934- Invincible Louisa: The Story of the Author of Little Women by Cornelia Meigs

1933- Young Fu of the Upper Yangtze by Elizabeth Lewis

1931- The Cat Who Went to Heaven by Elizabeth Coatsworth

1928- Gay Neck, the Story of a Pigeon by Dhan Gopal Mukerji

1924- The Dark Frigate by Charles Hawes

1923- The Voyages of Doctor Dolittle by Hugh Lofting 📚

1922- The Story of Mankind by Hendrik Willem van Loon

Pride and Prejudice
by Jane Austen

Over the Woodward Wall
by A. Deborah Baker